A graphic memoir is a narrative genre that is able to combine visual forms with text forms in order to preset information in a unique way. By including this imagery in addition to text, Dunlap-Shohl is able to communicate his personal journey through Parkinson’s that people from all types of backgrounds can relate to. By utilizing various fonts, speech bubbles, contrasting colors, and spacing, Dunlap-Shohl presents Parkinson’s Disease in a way people have not seen before.

One of the first differences I noticed between the graphic memoir and a novel was the use of bolding words. When looking at the graphic memoir, there are many words bolded on each page, something not commonly seen within novels. On pages 32 and 33, there are many bold words which seem to fit into two categories. The first category I see the words fitting into are words that are related to strong emotions and feelings. These words include “despair”, “fear”, “loathing”, “sanity”, and “mad.” On the other hand, some words seem to be bolded to represent which words are emphasized in thoughts or conversations. For example, Dunlap-Shohl’s though bubble on page 32 reads “But it was more than just what she said. It was also the conviction in her voice” (Dunlap-Shohl, 32).

In addition to Dunlap-Shohl’s use of font, color also plays an important role in how ideas are represented. When personifying Parkinson’s Disease, Dunlap-Shohl uses a light green color. Though green can be used to represent nature and harmony, it also has negative connotations like envy, sickness, and disease. Dunlap-Shohl used the same color green when depicting his negative side on page 53. Because he has the same green skin as Parkinson’s, I believe this shows that he sees his disease and as well as himself (in that particular moment) as monsters.

Another important part of graphic memoirs is spacing. While the variety of spacing techniques keep me interested as a reader, I believe they also have a deeper meaning. Some of the illustrations, such as the one on page 58 depicting him falling off a ladder, are large and are meant to grab your attention right away while others are much smaller and compact. When Dunlap-Shohl explains his process of learning to use the computer to illustrate on page 42, the boxes seem smaller than many of the other ones. I believe this is because it makes the reader slow down. During this scene, Dunlap-Shohl is frustrated with learning the new program because it takes such a long time. By using the small boxes, it takes the reader a much longer time to read this page compared to other pages with larger images.

Overall, Dunlap-Shohl portrays his journey though Parkinson’s Disease in a new light. From fonts and speech bubbles to color choice and box size, Dunlap-Shohl keeps the reader entertained while also including hidden meanings. 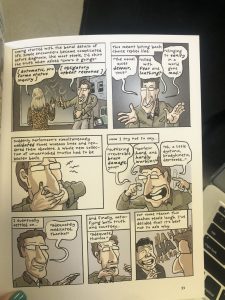 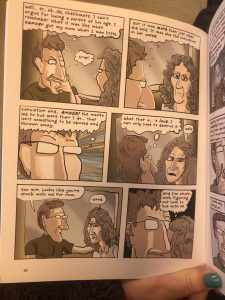 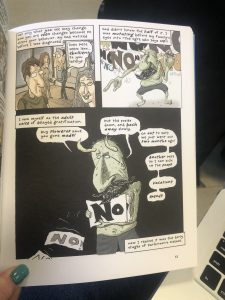 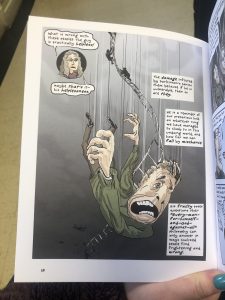 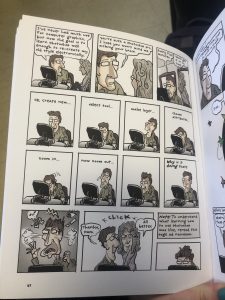