There is a light-heartedness in using the medium of a graphic novel. In Peter Dunlap-Shohl’s My Degeneration, comics open the door for more people to engage with and understand the experience of Parkinson’s disease. Because of the stigma present in our society, long-term illness is not spoken about often – in My Degeneration, things that would be potentially awkward or embarrassing to talk about are laid out in a visually engaging and accessible way. Dunlap-Shohl uses images and words to convey movements, emotions, sounds to create a humorous and personal memoir which made me understand and deeply appreciate the graphic novel. 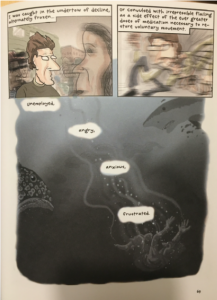 In the two frames on top of the page on the left (p.69) Dunlap-Shohl represents his body and its movement in relation to other people, “the non-Parkinson world”. On the left, he is the only sharp, coloured-in figure while the other people are blurry, suggesting movement. He is frozen in time. Alternatively, his medication causes rapid movements and convulsions: on the right, he is the arms of his body drawn repeatedly, the image of his body blurry, distorted. The real world is drawn in two frames, while the drawing of the underwater world beneath has no borders – a world inside his head. The overall image suggests Dunlap-Shohl feels like he is falling from the “normal” world into the deep waters of Parkinson’s and depression. “Unemployed”, “angry”, “anxious”, “frustrated”- the words describing him he draws in clouds – like spots on his consciousness. 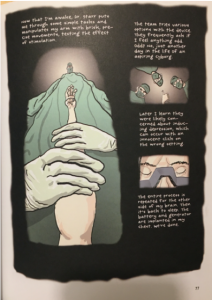 In Image 2 (p.77), the lack of borders around the image again suggests that we are in Dunlap-Shohl’s mind. The drawing depicts his perception of the post-surgery events: windows in the darkness reveal the distorted image of the doctor, rendered by his brain while recovering from anaesthesia. The text is the commentary within the brain of Dunlap-Shohl. Not communicating with the doctors, he is stuck in the dark frame and simply looking out of the windows. He is lacking freedom and control over his body during the procedure which is supposed to give him exactly that.

Spaces between frames in a comic imply a change of location or time: as a reader we understand that something happens between them. I found the image on the left (p.8) particularly interesting because of the use of frames, which Dunlap-Shohl uses to fragment his body. On the page before, he is crushed by a falling piano, a representation of the feeling of finding out about the diagnosis. In this image, frames of the comic disconnect his limbs from each other: space and time comes between them. Conveying the feeling of confusion and fragmentation upon hearing the news, the image also predicts the changes his body will go through due to Parkinson’s: him limbs not responding in the way he wants them to, leaving him feeling disconnected from himself.