In Peter Dunlap-Schohl’s My Degeneration, he illustrates his journey through Parkinson’s disease in the form of a graphic memoir, largely using metaphors and imagery to portray his experiences. On page 66, Dunlap-Schohl describes the process of rating his wellness by clicking different smiley face options: “Better than average, fair, poor” (65). He is choosing the first option when he is struck by the realization that he does not feel good at all. Before Parkinson’s, if he was having difficulty with daily tasks, he “would have chosen the ‘frowny’ and considered that an understatement” (66); but now, it is the better than normal.

This is an example of how much Peter embodies his illness and symptoms. His expectations of daily and normal life have changed. Illness forces him to carry everyday pain, but if the same symptoms were associated with his “healthy self,” he would not accept it as normal. This illustrates more broadly the expectations that are placed on the individual who is suffering. There are assumptions that the individual suffering should be getting stronger through the illness, and able to take on immense physical pain. Similar to the boxing analogy Peter uses, narratives of fighting the illness or rising above the symptoms can be problematic, as it puts a responsibility on the individual. As a parallel, often there is an understanding that the individual suffering should be able to handle it mentally. By Peter putting on the smiley face to replace his head, it shows a mask that many individuals have to put on in their daily lives to hide the struggles they are truly facing. The balance between accepting the illness and still maintaining the self is difficult, and a struggle Peter faces.

Dunlap-Shohl, Peter. My Degeneration: a Journey through Parkinson’s. The Pennsylvania State University Press, 2016. 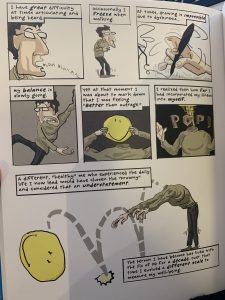