A Dogs is a Man’s Bestfriend 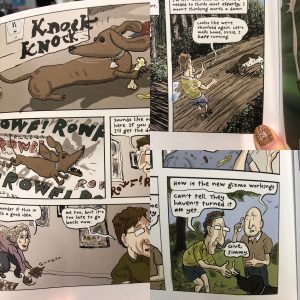 The second metaphor, Dunlap-Shohl uses is Philippee Petit’s walk on wire between the twin towers. This metaphor does a great job at capturing the fear and the important decisions he has to make every step of the way. Similar to how Dunlap-Shohl has to be careful which the decisions he has to make while having Parkinson’s. For example, Dunlap-Shohl has to make tough decisions like, taking medicines at a certain time of the to avoid unwanted side effects or withdrawals, deciding whether or not to get neurosurgery (Dunlap-Shohl 72), or simply relearning how to walk (Dunlap-Shohl 35) etc.. The task of doing these things are simple, but the emotional stress it puts on individual is similar to the idea of taking the next step on a wire. One lapse of good judgement while walking on wire can lead to a serious injury or death. Similar to the decisions Dunlap-Shohl is taking.

It is important to note that the wire metaphor has weaknesses. Dunlap-Shohl states, “The only way is forward,” but this isn’t true (Dunlap-Shohl 92). Someone could choose to jump off. Which is what Dunlap-Shohl considered doing at the very beginning of the book. Many people who struggle from chronic illnesses die by suicide. Also, most people realize that having a chronic condition is scary, but Dunlap-Shohl brings up the positive things that come out of it (Dunlap-Shohl 42-44). One might argue that getting to the other side of the rope is a positive experience but with Parkinson’s there is no “end of the rope” except for death. Meaning, the disease is chronic and it does not stop so once one reaches the end of the “rope” with Parkinson’s, there isn’t much to celebrate. Whereas in real life, there are many things to celebrate along the way, or on the journey through Parkinson’s disease.

Of course, there are many valuable pieces to the wire metaphor, but I think the strongest and most subtle metaphors in this book are his dogs. Image 1 shows three different dogs that he interacts with in more than one drawing. The dogs represent what it is like to live with Parkinson’s disease. All dogs are dogs, just like everyone with Parkinson’s disease has the disease but it doesn’t look the same on everyone. Just as none of the dogs in the book look the same but they look similar. When Dunlap-Shohl was diagnosed with the Parkinson’s he had to relearn how to take care of himself. At first it was difficult and he had to accept help from his friends and family. This is similar to what it is like when someone gets a puppy. The owner has to take care of the puppy, get to know the puppy and teach it to behave. Teaching a dog to behave can be similar to learning new triggers/symptoms from a disease. It takes times to identify what they are and it takes a medical staff (help) identifying what the triggers are and how to make them stop. With practice and patience, a patient learns the new tricks to taking care of themselves and they can begin to enjoy their new way of life. They may have flair ups but they have mostly got it under control. A person with Parkinson knows they will eventually die from the disease, but they can keep a positive light on it because they are learning that living with a chronic disease is about enjoying each day and not counting to the days they die.  This is similar to the life of a dog. Eventually the puppy grows up and it is trained properly, but sometime the dog has accidents inside the house  (like flareups with Parkinson’s disease). Dogs do not count down the days to they die, they live one day at a time. Of course not everyone is dog person and this might by synonymous to the people who are not as lucky as Dunlap-Shohl  to have the resources to seek the same treatment he had. However, the metaphor works.